Let’s normalize hesitancy to take a new vaccine. Instead of judgment, we need to empower trusted messengers to answer community questions and dispel myths.

By Dr. Eugenia South, assistant professor of emergency medicine at the University of Pennsylvania

Ten years ago, my father-in-law fell 13 feet from the top of his tractor-trailer. Only after completing his delivery, driving 35 miles home and showering, did he finally go to the emergency department. Although he had five broken ribs and a lung contusion, he was discharged. He returned to the doctor with difficulty breathing, but it would take several visits (during which symptoms were dismissed and test results misinterpreted) to diagnose fluid around his lungs and heart. He required surgery and suffered a post-operative cardiac arrest. His survival is a miracle.

I reflected on this complex relationship between racism and mistrust as I considered whether to take the Covid-19 vaccine.

Throughout, our family remained vigilant about my father-in-law’s medical care. We carefully observed his interactions with providers to ensure his pain was adequately treated, symptoms taken seriously and discharge instructions explained well. We are Black and know these standards are not always guaranteed for us. I am a doctor and have seen Black patients treated with disrespect; their concerns and symptoms dismissed.

I reflected on this complex relationship between racism and mistrust as I considered whether to take the Covid-19 vaccine. As an emergency medicine physician with regular exposure to Covid-19 patients, I knew I would be prioritized for vaccination. However, for many months, I was decidedly and definitely against being among the first to get the shot. Instead, I planned to wait and see how others did with the vaccine. I suppose I am wary of the very system to which I have dedicated nearly two decades of my career.

To be clear, I am not a vaccine skeptic — my three children are fully vaccinated and I dutifully take my flu shot year after year. But I had serious doubts about the speed of the Covid-19 vaccine development process, which seemed to me to be a political tool then-President Donald Trump was trying to use to win re-election. How could a vaccine developed under a president who displayed repeated acts of racism and who actively enabled white supremacist groups be trusted? Across the country, many Americans are wrestling with similar concerns. 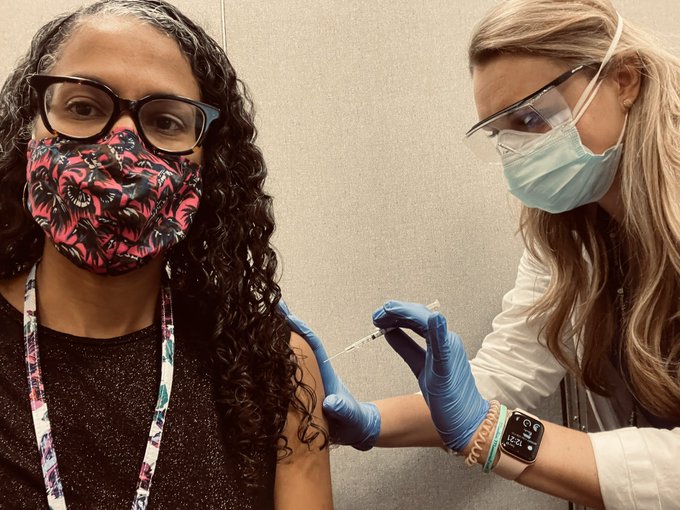 Here is what helped change my mind. First, I had to educate myself about how the vaccine had been created. The mRNA technology behind the Covid-19 vaccine has been under development for decades. Yes, its compressed timeline was aided by governmental funding, but the vaccine was worked on by thousands of scientists, underwent a rigorous three-phase clinical trials process, and was approved by two federal advisory boards (the Food and Drug Administration and the Centers for Disease Control and Prevention). Also, seeing photographs of Kizzmekia Corbett, a Black scientist at the heart of Moderna’s vaccine development, in her lab was powerful. Representation matters and is critical to repairing centuries of structural racism that contributes to medical mistrust.

Second, I read the experiences of people of color and trusted Black physicians who participated in vaccine trials. Reading their thought processes, how they weighed risks and benefits, and what their symptoms were after the second dose helped me envision taking the vaccine. Never doubt the power of social media and the written word to influence behavior.

Third, my mom practically begged me to get the vaccine. Since March, she’s been hearing my own terrifying stories about Covid-19 patients. The tears of a young woman with only mild symptoms, who worried about exposing her elderly father in their small home. The middle-aged, healthy health care worker who came in gasping for air; the fear in her eyes as we talked about the need for intubation. She survived. Many did not.

Still, I was undecided until the Pfizer trial was published. The graph from that study showing the continued rise of Covid-19 infection in the placebo group compared to the near complete drop-off in those who received the vaccine will forever be imprinted on my mind. In addition to being a physician, I am a scientist. And while the historical examples of experimentation on Black bodies in the name of science are too numerous to count, and concerns about racism and bias in research persist, I still trust rigorous science. I was almost ready to say yes.

My final concern was the risk of a rare, severe and yet undocumented long-term side effect of the vaccine. The Pfizer study only followed people for two months. But I was reassured to learn that, for vaccines generally, adverse reactions most commonly occur in the first days to weeks after vaccination. I weighed these unknowns against the risks of contracting the coronavirus — death, a prolonged hospital stay or, and perhaps most convincing to me, the increasingly documented lingering, and not rare, long-term complications from Covid-19 itself: brain fog, difficulty breathing, extreme fatigue, depression.

The choice became clear. I would get the vaccine.

I didn’t feel well for three days after my second Covid-19 shot. I had a fever, body aches and headaches for 24 hours; then fatigue. Motrin and Tylenol helped with my symptoms, which were a small inconvenience to gain the freedom of finally being able to work in the emergency department without fear.

Let’s normalize hesitancy to take a new vaccine. Shaming people who have questions will not encourage uptake. Skepticism is especially salient for Black people, for whom centuries of mistreatment and harm from systems meant to serve and protect have engendered mistrust.

Health systems and public health agencies rushing to address vaccine hesitancy among Black people must first acknowledge their own role in creating and perpetuating mistrust. The goal should then be, in partnership with Black people, to create forums for conversation and opportunities to have questions answered in nonjudgmental ways by trusted messengers.

I am concerned that the underrepresentation of Black people among those who have received the vaccine so far will lead to a further widening of racial disparities in Covid-19 infection and death rates. And so I share my journey from “no” to “yes,” my own #BlackWhysMatter, with whoever will listen, to allay fears and open doors for conversation. I want to help people make informed decisions.

And if you’re wondering, yes, my father-in-law just signed up for his vaccine.

As new variants of the virus spread, a race is on to vaccinate the public to protect against potentially more dangerous strains

As the coronavirus mutates and new, more contagious variants spread with alarming speed, the United States and the rest of the world are racing to vaccinate as many people as possible before potentially more dangerous strains emerge.

The overriding concern is that the continuing spread of COVID-19 — more than 1 million new infections every week in the United States alone — will allow the virus to evolve in more insidious ways that could defy the protections of existing vaccines, epidemiologists say.

“We’re absolutely racing to get prevalence down as quickly as we can, because we never know what the next mutation might be,” said Dr. Paul Biddinger, medical director for emergency preparedness at Mass General Brigham and chair of the state’s COVID-19 vaccine advisory group. “The more virus in the community, the more chances there are for the virus to mutate.”

Viruses naturally mutate as they proliferate, but the mutations are typically minor and don’t have a material impact on how they affect people. But when multiple mutations occur and the new virus succeeds in propagating, it’s considered a variant.

In recent months, variants of COVID-19 have been discovered in the United Kingdom, South Africa, and Brazil. They have raised growing concerns among epidemiologists because they appear to be more infectious and potentially more virulent, although the latter remains unclear.

Some preliminary evidence suggests the existing vaccines may provide less protection against the variants that have emerged in South Africa and Brazil, both of which were recently discovered in the United States. Those variants may also be able to infect people who previously contracted the dominant strain of COVID-19, which emerged in China.

On Friday, Johnson & Johnson announced that its closely watched COVID-19 vaccine prevented 66 percent of moderate and severe cases in a large clinical trial. But that number fell to 57 percent in South Africa, where the highly contagious variant is the dominant strain.

“It’s not the same pandemic as it was a few months ago,” said Dr. Dan Barouch, who runs the virology center at Beth Israel and is one of the world’s leading vaccine developers. “This is very strong efficacy data against a complex pandemic involving multiple resistant variants circulating globally.”

RELATED: We may soon have a third vaccine. Here’s what you need to know about the Johnson & Johnson shot

But even if the current vaccines don’t provide the same level of immunity against the new variants, they still appear to defend the body and are likely to reduce the severity of an infection, said Erin Bromage, a biology professor who studies infectious diseases at the University of Massachusetts Dartmouth.

For example, if a person requires a certain level of antibodies to fight off the dominant strain of the virus, he or she may need five times that to fight off some of the new variants, he said. But the vaccines are likely to generate significantly more antibodies than the body needs to defend itself.

“There seems to be enough of a buffer to provide sufficient protection,” Bromage said.

That said, Moderna, Pfizer, and other vaccine producers have been studying the variants to determine whether they need to adjust their vaccines or prepare additional booster shots to increase their effectiveness.

The greater concern is what could come next, as the virus spreads like wildfire across the planet. This week, the virus passed another milestone, having infected more than 100 million people, a quarter of them in the United States.

On Thursday, health officials said the variant identified in South Africa had been found in the United States for the first time, with two cases diagnosed in South Carolina. Neither of those infected had any history of traveling or any connection to each other, officials said, suggesting the variant has been spreading through the community.

“I am worried,” said Dr. David Hamer, an infectious disease specialist at Boston Medical Center. “There’s a lot of disease being transmitted, and that sets the stage for vaccine-resistant mutations. If we had better control, that would reduce the opportunity for the rapid evolution of the virus.”

For that reason, he and others said, it’s too soon to relax restrictions and they questioned plans announced by Mayor Martin J. Walsh Tuesday to allow Boston fitness centers, movie theaters, museums, and other indoor recreational venues to reopen.

Most businesses will remain subject to the 25 percent capacity limit, which the state extended through Feb. 8, and other gatherings will remain capped at 10 people indoors and 25 people outdoors.

You may have missed

Bowser will make case for D.C. statehood at congressional hearing next month

Good Morning America A year after his death, Ahmaud Arbery’s mother plans to celebrate his life